“True Food Kitchen will occupy a 5,000-square-foot standalone building off of the Himes Avenue entrance into Midtown and is slated to open in early 2021, the developer of Midtown, New York-based Bromley Cos., said Wednesday.”

With Locations In Four Tampa Malls, Kay Jewlers And Zales Say They Will Shutter Another 150 Stores

“Signet Jewelers Ltd., whose retail brands include Kay Jewelers, Zales and Jared The Galleria Of Jewelry, plans to shutter 150 stores in its current fiscal year as part of its previously announced turnaround plan.”

“Life Storage L.P., a Buffalo-based company that ranks as one of the largest self-storage facility owners nationwide, has acquired a 634-unit personal warehouse project in Tampa for $6.93 million.”

“Nearly two decades after it first rose above the Garrison Channel in downtown Tampa, the Marriott Water Street is ushering in a new era for both the urban core and the city’s hospitality industry.”

“A Clearwater-based company with plans for a major retail development in downtown Naples has added to its assemblage with a $6 million purchase, Collier County property records show.”

“The Richman Group of Florida Inc., will not be getting $16.5 million from the taxpayers of Pinellas County after the U.S. Supreme Court on March 25 refused to hear their arguments.”

The Bungalow In South Tampa Files For Liquidation Bankruptcy

“The Bungalow Restaurant and Bar in South Tampa has filed for liquidation bankruptcy, alleging that its landlord refused to allow the transfer of its lease to prospective buyers of the business.” 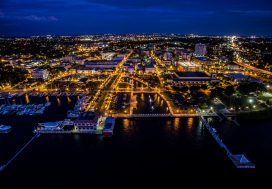